The name “Journal of JSAI” indicates that it is an academic journal published by the Japanese Society for Artificial Intelligence. However, we think that most people in society are not interested in JSAI (at least at the beginning), but they are interested in the technology and the concept called “artificial intelligence.” When changing the name of the Journal of JSAI this time, we thought that it would be better to drop the word “Journal of JSAI” and change to “Artificial Intelligence” to get many people interested. When we introduced the idea to President Yamaguchi, he immediately answered that it would be beneficial. In the Board of Directors as well as the Editorial Committee, the idea was approved with almost no dissenting voice.

With the change of the name of the journal of JSAI, we decided to change the cover design. Using crowdsourcing, we called for the design in a competition style. In all, about 100 design proposals were submitted in just four weeks. For the proposals, a vote was conducted by Directors, members of Board of Editors, and the general public (including members). As a result, the adopted design with a woman at the center overwhelmingly occupied first place among the Editorial Committee and the general public and was supported as the second place among Directors. There were many much “quieter” designs, but the design that took first place by the vote was the one that required a much larger change than we expected. Honestly speaking, we worried about whether it would be appropriate as the cover of the journal of JSAI. We were also concerned with what successive Presidents and current members thought. However, considering its appeal to many people, being a cover that people want to pick up once, or a cover that people happen to notice will be an important element. Only if we make people pick up the journal once and look at the content, there must be many people who will find some interest in the contents. To make many people feel the fascination and fun of artificial intelligence would be an important mission of JSAI. The very “challenging” design was chosen because numerous people having been involved in JSAI have continued to feel it all the while.

Each issue will have a different cover design from now on. The design adopted this time has the concept of “artificial intelligence in everyday life,” which expresses that a vacuum cleaner has become artificially intelligent. We would like you to look forward to receiving the next issue and the ones thereafter thinking what cover page it will have. To make many people read the journal of JSAI, we plan to make attempts to make journals and articles of JSAI available in various ways. All members of Editorial Committee will devote themselves to the journal of JSAI called “Artificial Intelligence” to deliver it to many people and increasingly carry interesting articles. 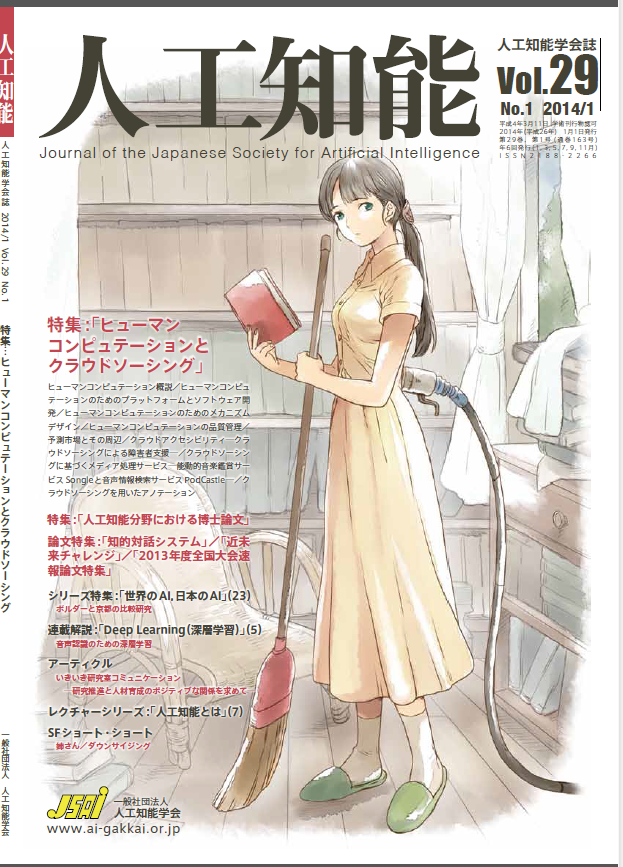